Denying involvement in the massive gas attack in Idlib this week, Syria President Bashar Al-Assid triggered US President Donald Trump in considering to put a military action on the country after seeing the devastating suffering of the people in photos and videos where at least 85 people, including 20 children, died according to doctors and a Syrian monitoring group..

“Yesterday’s chemical attack, a chemical attack that was so horrific in Syria against innocent people, including women, small children and even beautiful little babies, their deaths were an affront to humanity,” Trump said. 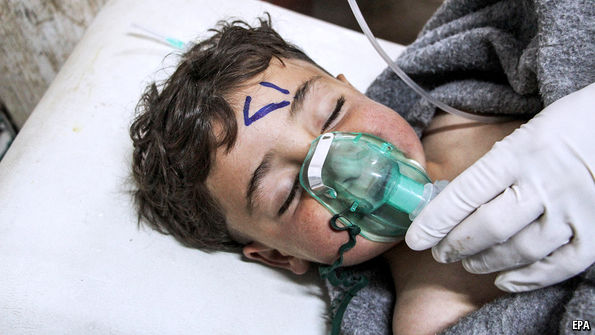 Innocent children suffered from the chemical attack. Photo by The Economist

“These heinous actions by the Assad regime cannot be tolerated. The United States stands with our allies across the globe to condemn this horrific attack and all other horrific attacks, for that matter,” the US President added.

In 2013 and 2014, Trump urged former US President Barack Obama to dismiss military action plans against Syria following a then chemical weapons attack under Assid’s regime, and to focus on “fixing the US” instead but this incident changed his views on the Assad regime.

Assad has a history of stubbornly denying issues back to 2005 when former Lebanese prime minister and leader of the anti-Syrian opposition Rafiq Hariri was assassinated. Lengthy UN investigations found convincing evidence of Syrian regime complicity.

Meanwhile, the US had promised to take an action if the UN fails to act on the chemical weapons.

“When the United Nations consistently fails in its duty to act collectively, there are times in the life of states that we are compelled to take our own action,” US ambassador to the UN Nikki Haley told a Security Council meeting on Syria.