Chris Blue of Team Alicia Keys took home The Voice Season 12 grand title on May 23, singing “Everybody Hurts” with Usher on his finale performance while also paying tribute to the victims of the recent tragedy at Ariana Grande’s concert.

Blue landed a record deal and $100,000 prize and his historic victory flashbacked to his blind auditions, where he was the very last person selected to join the NBC singing competition. Coaches Levine, Shelton, and Gwen Stefani’s team were all full, and Keys had one remaining spot which is why she turned her chair for the pop and R&B singer. 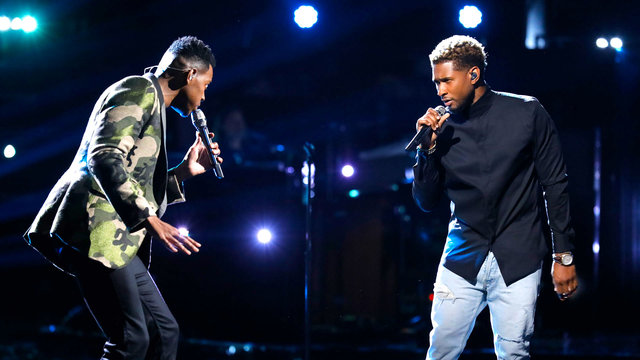 The Voice grand champion Chris Blue leaves a stellar performance of ‘Everybody Hurts’ with Usher in the finale episode. Photo by NBC

Hailing from Knoxville, Tennessee, the 26-year-old singer dueled against Jesse Larson from Adam Levine’s team and Lauren Duski and Aliyah Moulden from Blake Shelton’s team. Larson teamed up with CeeLo Green to sing “Shining Star,” while Duski performed with Little Big Town to perform “Better Man” and Aliyah added her vocals to Alessia Cara’s “Scars To Your Beautiful.”

In the Monday episode leading up to the finale, Blue unleashed three electrifying performances of his original song “Money on You,” a duet with Keys of Prince’s “Diamonds and Pearls” and delivered an amazing rendition of Janet Jackson’s “Rhythm Nation.”

Asked about his winnings, Blue shared he will be using the prize to give his fiancée, Stephanie, the wedding of her dreams.

“[I] can give [Stephanie] the wedding she desires and the start of a very long life together,” he said to USA Today. “We had to take a lot of things away from our already stripped-down wedding. We didn’t even have wedding [invitations]. Couldn’t afford it. The church wasn’t even going to be decorated. Couldn’t afford it.”

Apart from being The Voice champion, Blue is also a worship leader at Cokesbury United Methodist Church in Knoxville and currently, his version of Tamela Mann’s “Take Me to the King,” debuts at No. 1 on Billboard’s Hot Gospel Songs chart.